The story of Mendez Trucking started almost 37 years ago when Raul Mendez migrated to this country with little more than his hopes and dreams.

Originally from the city of Piedras Negras in the state of Coahuila, Mexico, Raul first worked in the fields picking a variety of fruits and vegetables in the lower valley of South Texas. After living in Eagle Pass, TX for several years, he moved his family to San Antonio, TX.

In San Antonio Raul worked as a truck driver. It was during this time that he wished to one day have his own truck and start his own company. After many years of hard work, Raul was just a few steps away from reaching his goal. He turned his lifelong dream into a reality when he sold his personal belongings to purchase his very first 18-wheeler. This was the beginning of Mendez Trucking, with Raul Mendez Sr. as the first employee.

Raul endured many hardships over the next few years before he could afford a second truck. But soon that second truck turned into a third truck, and then a fourth, until we arrive at what Mendez Trucking is today.

Mendez Trucking has grown by leaps and bounds over the years thanks to one man’s dedication and the family and friends who have stood by his side. Today, Mendez Trucking is one of the largest independent trucking contractors in all of Texas. To this day it’s still a family business with both sons, Roland and Raul Jr., working with their father. The company employs dozens of hardworking drivers and has more than 85 trucks in its fleet.

Under the Mendez flag, many truckers have had the opportunity to work, save, and finally purchase their own tractors to reach great heights.

The amount of success stories that come from this one company is staggering. Raul Mendez is hailed as a hero by many, from the Rio Grande area to the Midwest and beyond. Traditional songs known as “corridos” have been written about him, and his story inspires thousands from Mexico, Texas, and the Southwest.

To this day, Mendez Trucking is a company that treats their drivers right.

In 2003 Raul and his family built a service shop, now known as Texas Chrome, to extend the Mendez philosophy of quality service to all fellow truck drivers. At Texas Chrome, everyone who comes in to service their tractors is entitled to respect, honest prices, and quality work. Since its creation, Texas Chrome has shown that the same principles that made Texas Chrome so great can be applied anywhere.

The story of Texas Chrome and Mendez Trucking won’t be ending any time soon. With your support, Mendez Trucking and Texas Chrome will continue to provide the best possible service. Raul Mendez, his company, and his family serve as a wonderful example of how hard work, patience, persistence, and faith can make anyone’s greatest dreams come true.

We wish everyone the best, and may God bless you as it has the Texas Chrome and Mendez Trucking family. 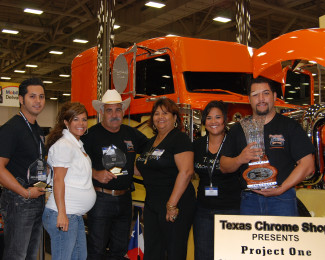